The Quiet Majesty of the Grand Tetons

Looking at the majesty of the Tetons, I was reminded of those lyrics by YES from so many years ago. I have always liked that those words seem to bring the mountains to life. A life of their own and as they stand there, if they were so inclined they could get up and walk away to another place.

The Teton range has been “standing there” for millions of years, but was established as Grand Teton National Park in 1929.  About 13 million years ago, two blocks of the earth’s crust shifted on a fault line, tilted one up and the other down forming the range we view today. The highest peek: “Grand” reaches to a height of 13,770 feet.   The area surrounding the range includes a lush valley with crystal shining lakes, groves of aspen trees and alpine meadows. The park is 484 square miles and includes the range and most of the nearby area of Jackson Hole.  Not to be confused with specifically the town of Jackson, Wyoming. This flat valley surrounded by the towering mountains was visited by many trappers in the 1800’s. The area was named “Jackson’s Hole”  after Davey Jackson: a trapper from that time.  In time, the apostrophe was dropped and it just became Jackson Hole. Both the town of Jackson and the geographic namesake of the area are linked historically and are “next door neighbors” sharing the same inspiring landscape. 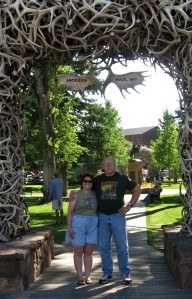 Many visitors to the Park also spend time touring the town of Jackson and many hotels, restaurants and shops are found closely to the Park. Jackson is also the home to three popular ski resorts, so it is even busier during the winter months. We were there in summer and there were some visitors from the Park, but their peak season is ski season. When we went to the Grand Tetons, we stayed in Jackson and had the opportunity to explore both. One of the most unique features of Jackson was the Town Square: decorated with cowboys statues and arches made from antlers. On first view, it seems a little morbid…but come to find out the elk shed their antlers every year. Most of the antlers used in the construction of the archways were collected from the area in the woods. Otherwise, that would have been quite a few elk to shoot! Here’s a photo of one of the arches. They do have quite an impact: it gives the town square a real rustic, western feel. 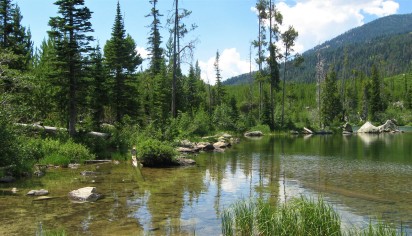 There are three entrances to the Park, the southern entrance is only 4 miles north of Jackson.  If traveling from the north, via Yellowstone National Park, the two parks are only 31 miles apart.  Nevertheless, the Tetons are frequently overlooked by the notoriety of Yellowstone.  Both parks have their own unique features, but personally I liked Grand Teton better. The majestic beauty of the mountains and the quiet solitude of the shimmering lakes gives one a wonderful sense of calm…good Zen.  Yellowstone provides a great showcase of unique geographic features: erupting geysers, bubbling mud pots and breathtaking waterfalls.  I don’t deny these are all part of an awesome park adventure, but the majesty and serene landscapes of the Tetons should not be missed.

With the varied terrain there are also different hikes suited to different skill levels. Yet, the easy to moderate level hikes provide a great day hike through sparkling streams, alpine meadows and loads of photo opportunities. We took a relatively short hike and ended up at Jenny Lake. Since it was an easy hike, we were not alone on the trail, but not crowded by any means.  I am always amazed by delightful conversations with fellow park goers. We had asked two women if they could take our family photo and they were happy to oblige (most folks usually are…) Come to find out they were also from a  Chicago suburb; very close to where we lived. Small world.

Some of the most iconic photographs of Grand Teton National Park include the antique barn on Mormon Row Historic District: the Moulton Barn. The barn stands as a picturesque back drop to grazing bison and antelope. It also reminds the viewer of the challenging life of farming that took place on these rugged lands. The area was settled by Mormons in the late 1890s. The community was established and 27 homesteads were built to form a close knit community. Most of the farmers grew hay and oats and had limited livestock. In the mid-1900s, Mormon Row was acquired to expand Grand Teton National Park and in 1997 the district was added to the National Register of Historic Places.  Several iconic barns still stand today and are widely recognized in photographs with the Teton range as the backdrop.

Grand Teton National Park: a magnificent, must see park for travelers to the west. Put your traveling shoes on. Julie E. Smith 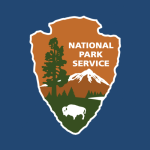