Living on the 45th Parallel

Posted on December 18, 2020 by americantrekkerblog.com 2 comments

It’s funny how a simple activity, like trying a new restaurant for lunch, can spur a whole new level of conversation and pique my need to look into a topic further. Sometimes, it goes beyond: “Oh, this pizza is really yummy.” Recently, my husband and I went to a local restaurant called the 45th Parallel. As you can imagine, the conversation turned to where we are living, on the 45th parallel, and why is that significant? More about this unique restaurant and distillery later…

So at the forefront of our discussion was the fact that Yes...we are roughly, geographically living on the 45th parallel in this area of Wisconsin.  It is significant for several reasons. First of all, C’mon…it just sounds cool: I live on the 45th Parallel. Sounds like the making of a great Sci-Fi drama, in conjunction with Area 51. But more seriously, it is significant because it is generally the half way point between the Equator and the North pole.   The 45th parallel latitude circumvents the globe and passes through the northern part of the United States, Europe, Asia and both the Pacific and Atlantic. In the U.S., only 4 states lie entirely north of the 45th parallel: Alaska, Washington, Montana (almost) and North Dakota.

In my state of Wisconsin, and many parts of Michigan, the proximity to the 45th parallel has become somewhat of a novelty and to some extent…a tourist attraction. Perhaps not in and of itself, but when combined with a really great restaurant and/or bar you’ve got yourself an attraction.  In Cadott, Wisconsin (located northeast of Eau Claire in Chippewa County) the sign welcoming visitors proclaims their status on the 45th, and also is the town’s official slogan: “Half-Way Between the Equator and North Pole”. Those of us that live on the 45th parallel, in the Midwest anyway…know that there is more to the attraction then just a line on a map. The climate and the beauty of the terrain here makes even the winters not so terrible. There is nothing quite like seeing the snow blanketing the branches of incredibly tall majestic pines. I remember when we moved up here, our cousin Al said: “Welcome to God’s Country” and I am sure he said something at the time about living North of the 45th. 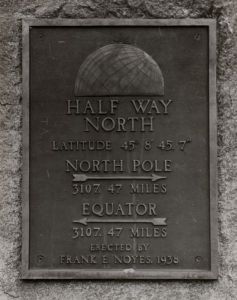 So markers informing travelers of their locations on the 45th parallel can be found from Maine to Washington. The oldest known 45th parallel marker is in Maine. Many of the markers in Wisconsin were placed originally in the 1930’s by a newspaper editor by the name of Frank E. Noyes. Several of the plaques bear his name and date.  So interesting to see a part of history and know that your footsteps are becoming a part of that history. Here is a photo of one of those markers placed on Hwy 141, 3 miles north of Lena, Wisconsin

When I looked up information on the topic, I found that it is not just cartographers who are interested in this phenomena, but historians and even vintners. It is probably not a coincidence that some of the best vineyards in the world, both in the US and Italy, are along the 45th parallel. Apparently the climate along that part of the globe is conducive for establishing vineyards and other crops.  Not just grapes for wine, but also hops and grains for other fermented beverages.  That brings me back to how the thoughts on this topic got started: a terrific lunch at The 45th Parallel.

I had a brief talk with Paul Werni, the founder of The 45th Parallel in New Richmond, Wisconsin. I led with the question that is perhaps on many customer’s minds: are we really exactly on the 45th Parallel right here?  Pretty darn close: about 7 miles from the exact latitude. Yet, Paul said that the only farm that they get their grain from, Rusmar Farm, for the distillery is only about 8 miles from here and the 45th Parallel runs right through their land. Cool. Paul also explained that when they opened, in 2007, there were only 50 distilleries in the U.S. Now there are over 1,600.

I’m hoping to go back again someday soon for perhaps a tour and hope to sample some of that “Richmond Rye” whiskey. Sounds great! When we were there we just sampled the lunch menu, and did not have time for further sampling. Hope to go back when we have time to savor the flavor of a smooth bourbon by the fire. For more information on The 45th Parallel Distillery, check out their website at: http://www.45thparalleldistillery.com  In the mean time, I find the simple joy in knowing that I am one of the 4% of the population that live on (or above) the 45th parallel. CHEERS! Julie E. Smith 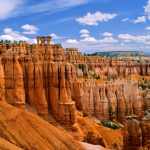