See you in Seattle! Top 5 attractions.

Posted on June 20, 2017 by travelingamericablog

On the west coast, Seattle is an iconic waterfront city filled with experiences that you “gotta see” when visiting there. One of the neat features about Seattle is so many  of the  sites are along the waterfront or within walking distance of the main downtown area. Even if you only have a day or two to spend in this vibrant city, here are the Top Five attractions that really help to define the Seattle experience. 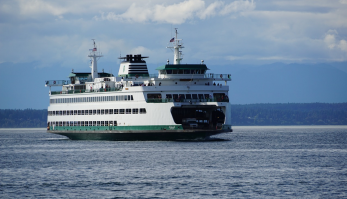 1–FERRY BOATS-Simplistic, but this is probably my favorite part of the Seattle area. Many native Seattle folks take them back and forth as commuters every business day and they are very commonplace along the waterfront.  Nevertheless, I find them so much an exciting part of visiting  this city.  It is really amazing how many people and vehicles fit on one of these huge boats. Even more amazing, is how smoothly and efficiently the loading and unloading is accomplished several times a day. For  more information on the ferry system, current schedules and sailing routes, check the Washington State Ferries web-site at: http://www.wsdot.wa.gov/ferries/  Crossing the water to Bainbridge or Kingston is not a long journey, but just long enough to enjoy being on the water and fantastic views of the skyline.  Also, usually just long enough to polish off a specialty coffee drink.  There are quaint little coffee shops all over Seattle and of course, right at the entrance to the Ferry terminals.  Seattle is  really big on coffee and is known for being the birthplace of Starbucks coffee. Which leads me to my next favorite: the original Starbucks cafe.

2–ORIGINAL STARBUCKS- Yup…this is where it all began: Starbucks Coffee. Even if you are not a huge coffee drinker, it is so neat to visit the original site where the first Starbucks opened their flagship store in 1971. It is smaller than one would imagine,  but therein lies the charm of the quaint place for the birthplace of this coffee giant. Tourists and locals alike seek out refreshment at this iconic stop frequently on their way to or from the next Seattle landmark: Pikes Place Market.  Another place that lends itself to lots of photo opps and an abundance of great sights and scents to sample.

3–PIKES PLACE MARKET-There are outdoor markets aplenty, but none can compare to the excitement and bustle of Pikes Place Market.

The Market opened in 1907 and is one of the oldest operating farmers’ markets in the country.  Before I went there, I heard that the vendors throw fish to each other in the process of filleting and also filling orders. What?! Sounds strange, and it is…but when you see a 15 pound salmon flying through the air it really gets your attention, not something you see in the average supermarket.

The Market is full of wonderful fruits, fish, vegetables, flowers and homemade honeys & jams.   Also, various craft items including jewelry, leather working, glass-works and pottery can be found there.  The building itself is quite impressive and was added to the National Register of Historic Places in 1970. It sits overlooking the Seattle waterfront. Built on a steep hill, it has several different levels with an abundance of differing shops.  The vendors take pride in beautiful displays of their wares, even the peppers are an art form in and of themselves; so many different colors and shapes!

4–PIER 54-IVAR’S & YE OLD CURIOSITY SHOP-Probably these two are the easiest to find attractions on the waterfront. Literally right when you walk off the Ferry boat and next to the ferry terminals.

Ivar’s is the seafood restaurant with both “casual” dining (more like a fast food style…but the food is still top-notch) and a lovely sit down restaurant.  Both Ivar’s restaurants offer great cuisine, depending what you are in the mood for.  The “casual” restaurant has outdoor setting by the water; and adults and kids alike are entertained by feeding your french fries to the seagulls. Entertaining yes….but the seagulls can sometimes get pretty aggressive. Just use caution; very small children shouldn’t partake in this activity.  Might be nice to keep all 10 digits.

Located on the same Pier is a very fun, touristy shop: Ye Old Curiosity Shop. Filled with many “curiosities” like shrunken heads, a 4 -legged chicken and mummies.  Some of the stuff is kind of creepy, although entertaining.  It has been part of the Seattle waterfront since 1899.  They have changed exact locations several times, but are generally in the same area. In addition to all the oddities, they do carry lots of the “usual” souvenirs, jewelry and also unusual items for purchase to remember your trip to Seattle. The totem poles at the front of the stores make great photo opps for you and your group. A terrific place to stop by and it’s right by the waterfront.

5–SEATTLE SPACE NEEDLE-One of the most recognized landmarks in Seattle is the Space Needle.  It is an observation tower that reaches 605 feet high and resembles the home of The Jetsons, if you remember that cartoon from the early 60’s. The tower was opened in 1962 and was built in honor of the World’s Fair held in Seattle that year.  The views from the top are fantastic and every one visiting this ocean front city should go up once. Yet, if you’ve done it once, that is probably enough.  Great views, but repeat visits to the city don’t really warrant several trips to the top of “the Needle”.  We did it once when my kids were little, but on subsequent visits I have always longed for and participated in the above listed “top 4”.  I wouldn’t think of going to Seattle without a trip to Pikes Place and lunch at Ivar’s. Polished off with a view of the setting sun by the deck of a Ferry boat.  Just writing these words make me realize I need to get back to Seattle soon.  Put your traveling shoes on. JES

← Don’t let this be “The One that Got Away”
Preserving a Legacy: St. Croix National Scenic Riverway →